Hey, before we jump into today’s episode, I want to remind you that the podcast production price point is increasing on July 1st. If now is the time, if this year you have on your wish list working with our team for your podcast production, let’s have a conversation. Head over to uncommonlymore.com/podcastproduction to learn more. Just to give you a quick rundown, if you want to hear more about what actually working with us looks like, last week’s episode with Cali is the one to go to or there’s another episode I did in February talking about what working with Uncommonly More looks like. Check out those two episodes. They’re really good way to get a feel for what the process looks like. And of course everything as far as information and what’s included, et cetera, et cetera, is over on uncommonlymore.com/podcastproduction.

I’ve heard a lot of conversations and comments on the internet, with friends, etc. The batching is just this stifling, creativity-killing apparatus just built to destroy your podcast. Okay. I might be a little dramatic there at the end, but it’s true. So, so many podcasters really think that batching is about giving up everything that’s great about their voice and their creativity, and their show. And reality, it’s the opposite. It’s about harnessing all of those things and using them incredibly efficiently.

I thought would reflect on this last year, year and a half for me and my batching because these last few months have been a really powerful reminder of why batching is so important because I’ve been behind the ball. I’ve talked about it on the show in the last couple of months. I’ve been really behind the ball and getting this show done, getting the show ready, getting the show for the team. It’s been hard for me to get the gumption up for it.

Mostly, because I’m processing a lot of things behind the scenes, and I’m working on other projects and some other stuff that I want to bring you guys. I will always prioritize our clients’ shows over mine. So we’ll just sort of put this in the bucket of like cobblers shoes, mechanic’s car. The things that don’t get work done, right? And through that, that difficult time, it’s reconnected me with why batching is so important because I’ll be honest. Getting the show done when I’m not batching is exhausting. It’s so much work. It’s so much ever.

First of all, first and foremost, I actually do the whole thing myself.

Maybe that’s the case for you. Maybe it’s not the case for you. For me, right now, I’m sitting in a lot of having to do the whole thing myself. I’m not just recording and the team is taking care of things because I have not batched. And so, like that’s the first negative consequence of my behavior.

The second one, I have no space for creativity.

I have no space for excitement. I have no space for inspiration and wonder because my brain is filled with stress and expectation. I have to get the show done because I owe it to so and so. I have to do this because it’s time for it to go out. And so, how often are you creative in that space? Not very. So I’ve been so reminded, why batching? And this piece is such a difference-maker.

I think I’ve heard, I’m trying to think of a non-ridiculous number. I’ve heard the statement. Well, I just don’t have the energy to batch. It’s just impossible to do two or three or four shows in a day. Why? Why? What about it feels exhausting? Because I would argue that batching is an exhausting.

The Way You’re Batching Your Content Is Making it Hard

I would argue that when you’re properly prepared and you have strategic guidance, you’re making space for that creativity to show up. You’re building assets. You’re building high-quality content that does the work you need it to do. Because ultimately, what might actually be exhausting is a lack of clarity, a lack of direction like a focus, a lack of strategy.

When you don’t know what you’re going to say, it’s going to be really hard to sit down and say it. And so my recent bout and frustration with batching is a great example of this. My messaging, my perspective of my business has evolved a little bit over the last year. I’ve gotten even more clear on who we work with best and who we serve the best. We can get the best results for. We got even more clarity about how I want our services to grow so that we can help more people and we could help our existing clients in an even deeper way.

And as that evolution has happened, there’s been times where it’s felt muddy. The thing I wanted to come here and say has felt harder to get to. It wasn’t because batching was a problem. It wasn’t because this podcast was a problem. It was because I needed to get clear. And I think your podcast can be really helpful in getting clear. It can be a great way to try on language and play with verbiage and test ideas and ways of presenting things especially if you’re somebody who speaks or writes books or teaches courses. Honestly, this is one of my favorite ways to practice material. And on the flip side, I often in calls with my client’s practice material I’m going to end up sharing here.

I can see now that I have some clarity. Well, I’ll say now that I have another layer of clarity around our messaging and who we’re meant to help and where we really thrive. Batching the show was feeling a little easier. Batching this content is feeling a little easier. I mapped out episodes through the end of summer. We talked about this a couple of weeks ago on the show and I was able to really quickly pull in what episodes I wanted to reshare and you’ll hear those starting in a couple of weeks. And that was possible because I had more clarity.

I want to really challenge you if you are telling yourself or telling your coach or telling your podcast producer that batching is just impossible. That you’re not somebody who batches. And yes, I’m hitting the air quotes hard with this one.

I want you to look at where the actual disconnect is because I’m willing to bet, it’s in your strategy. It’s in your messaging. It’s in your clarity around who your ideal clients are. It’s in positioning of your offer. Heck, I have seen- I’ve run in sentences where clients were frustrated with batching and it came down to a misalignment with how their services were put together and positioned. And honestly, it took them working with their coach and revamping an offer and suddenly batching was back baby. They were ready. They were clear and so excited.

So the truth of it all is generally a disinterest, to put it lightly or a resistance to put it honestly. To batching is a symptom of a larger problem. It’s a symptom of another issue. We talk a lot on the show about purpose and process and production. If you’re struggling with your process, reconnect with your purpose. And so I’m struggling to batch. Well, the process of this is that- Or the purpose of the show was to connect with potential clients, to nurture leads, to generate interest in services, to serve our community as part of our nurture process. Well, if I’m disconnected by who, with around who I’m nurturing, it’s going to be hard to be connected with my process.

I want you to sit down this week. Whether you’re having a hard time batching or not, I want you to reconnect with that purpose of your show. Now is a great time to do it. We’re coming to the mid-year point. We’re getting ready to at least around here, we’re getting ready to debrief you to build out, finalize plans for Q3. Not build out already built but finalize. So I’m putting some things in place. We’ve got some- We’ve got a really cool thing we’re launching in July. We’ve got the price increase in July. There’s cool stuff coming and I’m sure you have really amazing stuff coming, too.

So take a step back and reconnect with the purpose of your show.

We’re gearing up as we move into July to a lot of our quarterly calls for clients. We’ve got a lot of calls coming up. We’ve got some this week. We’ve got some next week. This is my favorite thing to do with our clients because we’re going to do this with them. We reconnect on, “Hey, what are we talking about in Q3? What are we looking at? What are we doing? What are the plans?” So that we can make sure that this thing supports that. And oh, by the way, that’s what’s going to make it easy for them to get the shows done, get the shows recorded so that we can produce them. So I hope you do the same and I’d love to do yours with you. And that’s exactly what our initial kickoff call is. So head on over to uncommonlymore.com/podcastproduction to learn more about working with us and I will see you next week. 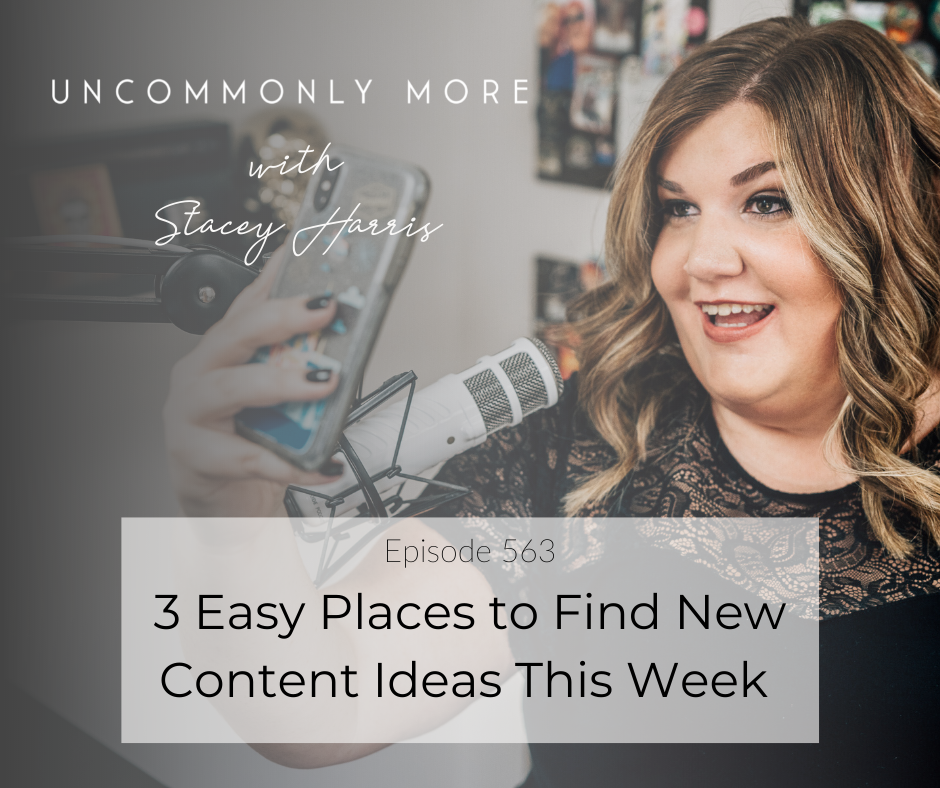