That’s right. It’s that time of year again. We’re looking at our end of the year content and in this episode we’re going to talk about the three things you need to be considering when it comes to looking at this content so that you’re not just writing out the end of the year and waiting for January, but instead building the trust you need to make sales in January while making sales in Q4. Let’s dig into it.

I’m really excited for today’s conversation because this last quarter of the year has its own nuances when it comes to planning and I have been in it with the planning this last month because this is the last month of Q3, which means we are sitting down with all of our clients to map out their Q4 content plan so we can get rolling so that we stay ahead, we stay with some room. That’s part of what we’re going to talk about today. But what’s also cool is because we wrapped all of our active clients Q4 strategy calls in Q3 in September, we have some room. We do have room in October to bring on a couple of new production clients, which means, that’s right, now is the time. Let’s jump in. Let’s have this conversation. Let’s finish Q4 and finish 2021 really strong with your podcast so that we’re really setting you up as you move into 2022 to already have this off your plate so that you can focus on those things you are planning to do next year.

Head over to uncommonlymore.com. Learn all about what’s included, how we work, book a conversation with me, you can do it right there on the website, and you and I can sit down and hammer out the specifics, and make sure now is the right time for you and make sure we are the right team for you, and get really clear on your next steps because that’s what that initial call is for. I’m so excited. Head over to uncommonlymore.com, get it booked. Let’s do this. I’m so stoked.

With that said, I want us to shift gears into really talking through these three things that I want you to be considering because this is the nuance that this part of the year needs. I want to start with where we always start when we sit down and have these strategy calls with our clients. The very first question I ask every single time as we start getting into planning content is what are we selling?

What are we selling?

What are we selling? Because if we don’t know what we’re selling, we can’t figure out what they need to know to help them decide if now is the right time for them. Here’s where the nuance comes in though, when we start talking about what we are selling when it comes to Q4, frequently, I also want to look to Q1. Because if you have a mastermind program, you launch in January, or you have a course launch that happens in late January or February, we need to be priming for that launch now.

Because the last 12 weeks of the year are a touch noisier and a touch more crowded and we’re all a little more distracted and some of us are unplugging and some of us are doubling down and whatever the case may be for you, you may need to start talking a little sooner than you think. That is part of this nuance of Q4 because it’s not just about what you’re selling this quarter, maybe more than any other quarter, it’s at least a little bit about what you’re selling next quarter. Especially if maybe you’re in a position where you’ve got something really large that you sell in Q4. We’ve got clients who have 12-month mastermind programs and Q4 is where they’re selling that for a January start. We need to think about what we are selling here but also how we are handling post launch. Is there a secondary offer that they move into if they weren’t ready for this? Is there a nurture period? Whatever the nuance is for your show, we’ve got to consider both parts at this time of year because, more than ever, you are really leaning into the next quarter as far as either needing to build up or maybe chill out, whatever the case may be.

The other side of this really leads us to our second thing I want you to consider, which is timing.

That’s because maybe more than any other quarter, I’m cognizant of the fact that I am planning Q1 in tandem with Q4 because I’m going to get Q1 content started earlier than I would normally. Because at the end of the year, I’m planning for time off. All of our clients plan for time off, at least, a little bit because our agency closes the last two weeks of the year. If you’re working with a team, there may be some things you need to get done sooner rather than later because of this. That’s going to need to be factored into your planning. A lot of this is about planning, not just for your goals and the timing of that, but also the space that you want to have both in actually getting content done ahead of time and maybe any time off that you’re going to have.

The reason we think so much about this, I’m trying not to laugh at myself because this is wildly embarrassing, but it’s because I have screwed this up almost every year of my podcast. Probably half of the years I’ve had a podcast, I have screwed this timing up. Luckily, I haven’t done it in a couple of years. I’ve managed to kick this, I’m pretty sure. But more than once, I have planned Q4 and been rocking and rolling to go and then I take some time off in December, which is time I normally would have been recording January content, and then I come back in January and there’s no content. I have to get the content ready at the last minute and that’s the worst.

Yes, even experts are occasionally poor at taking their own advice and yes, we make bad life choices too. But I don’t want you to do that and that’s why I can get on this soapbox so comfortably is because I’ve screwed this up so many times that it sucks. When I’m planning, I’ve got to be planning for that time, that space, and that recovery. I’m looking at where can I create some space, where can I pull some things off my list, and that really pulls us into the third thing I want you to consider.

Which is not just repurposing but remarketing.

If you’ve got a launch for a program happening in Q4, I want you to be doing a ton of value but I don’t necessarily want to put you in a place where you are having to mass create content to sell this program. Where can you repurpose stuff you created during last year’s launch? I want you to be putting out the content that helps sell the program but maybe that’s not content you’ve put out in the last sales cycle, maybe it’s content you’ve put out over the course of 2021. Well great, maybe we don’t actually need to re-release that content, maybe we can gather it and add some support to our emails by starting a story in the email and linking to the rest of the story in an email or putting together a short list of the three questions you need to answer before you make this next decision. Those are episodes, you’ve covered that content.

A great example for us would be episodes like how you know when it’s time to hire an agency or breaking down the difference between an editor, a strategist, and a production agency, or those kinds of episodes where it really talks about the nuance and the specifics of what we do. Again, because we’re building episodes that help people decide things, we are building a list of those most helpful episodes right now to help you make a decision. Whether that decision is to buy or not is irrelevant, I just need you to make a decision. The same is true for your audience. We need them to make a decision. Honestly, sometimes that decision not to work with us—if anyone’s ever had a client who was less than wonderful understands the decision not to hire—is sometimes the most important decision we want them to make, thanks to our content. We want to make sure we’re in alignment. That way, everybody wins and everybody gets value.

Look back, look at what you’ve created, and find new ways to use it. Some of that’s going to be repurposing and turning stuff into other things. Some of that is going to be straight up just remarketing, resharing on social media, resharing via your email list, sending it out in follow-up emails, whatever feels right for you. But take some time as you’re doing your Q4 planning to really assess what you’ve created and what’s going to be valuable. Those are the three things I want you to consider. Quick recap.

I want you to plan for both content and space so that timing around your space also needs to be really critical. What’s going to be helpful with that is that third thing, that looking back, that’s sitting down and assessing what you’ve created and looking for ways that you can repurpose, re-promote, rerelease, whatever it is so that you can make more with what you’ve already created instead of having to start over and create new.

If this episode was helpful, your very next step if you have not yet, is to make sure you subscribe to the Podcast Newsroom and listen to that episode around the three episodes you need to be creating right now. Like I said, it’s completely available now. In that episode, we’re digging into these sales assets similar to what we talked about a couple of weeks ago, and that’s sales assets you need to be creating. This is going to be more of that kind of conversation with three specific episode examples that I want you to be creating as part of your asset library.

Let’s wrap it up. Again, if you don’t have Podcast Newsroom access yet, head over to uncommonlymore.com/newsroom. If you want to learn more about what working with our team looks like, if you’re ready to hand off your production, it’s time to take action on that, let’s do that, that’s also over at Uncommonly More. I will see you same bat time, same bat channel next week. Bye. 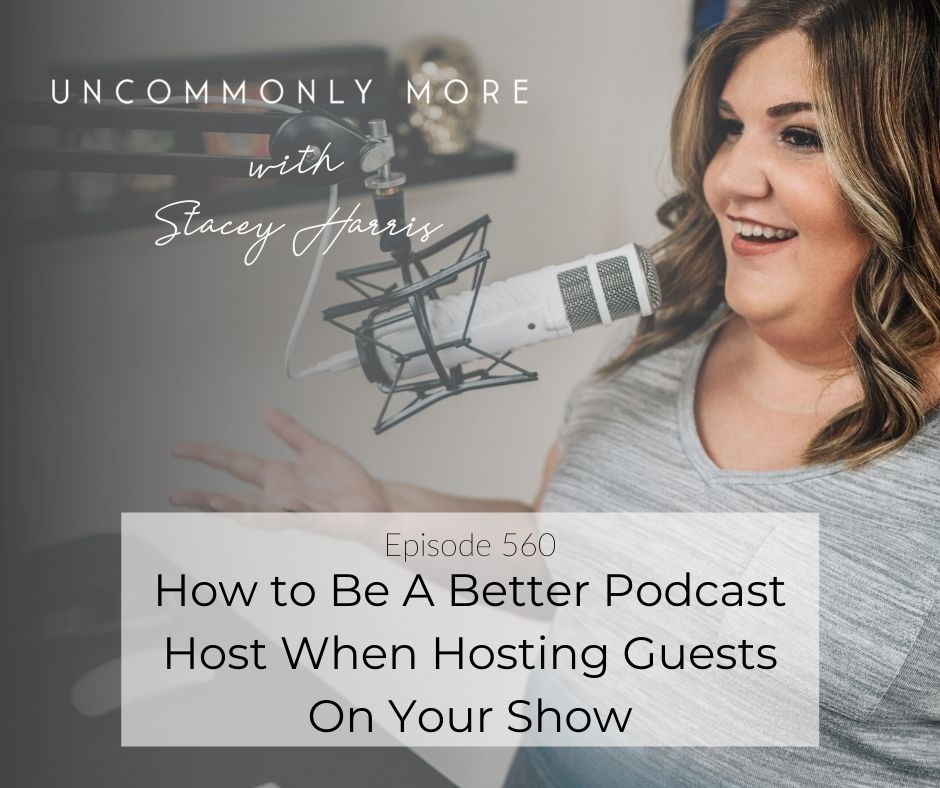